Valentine’s Day 2021 is very different to previous years, and significantly so from its somewhat uncertain origins1. Many small businesses in particular might be feeling a little like their medieval and earlier counterparts, and those of us trapped at home might be feeling like we’re back in the same era, especially for those who are single.

Speaking of single, I am, and, I’m not looking to be anything but. Valentine’s Day doesn’t particularly bother me – to me, it’s a day like any other. Not that I am not thoughtful, or can’t be romantic. I just don’t believe that a single day should be the focus for such things. I do know, however, a lot of people who do subscribe to the concept, and being single for them on this day is particularly hard. It’s not always just a simple matter of accepting being single for some, either, or just getting on with it. For many, it’s a day that emphasises that they are unloved, or unworthy of being loved. While I know that is untrue, it is also something I can relate deeply to. It’s a fairly hefty internal battle with no quick-fix solution (and for the record, asking someone why they are still single is a) none of your goddamn business and b) none of your goddamn business so stop doing it!).

I’m not a counsellor or psych, so won’t offer advice on how, but I can say it is a battle that can be won.  Don’t give up*.

A recent piece of research commissioned by the loyalty program of the Commonwealth Bank of Australia (take that as you will) indicated that 42% of us were intending to celebrate Valentine’s Day this year… but mostly on a bargain-hunting budget.2 Nearly half of us wanted to dine out, with other ways of showing how we feel broken down roughly evenly between buying flowers, buying chocolates, food and perfume/aftershave.

In terms of business, like last year, Cardinia is particularly susceptible to the effects of this snap lockdown, thanks to the higher numbers of small businesses in the Shire. For many in the gift-giving industry, this weekend is traditionally their biggest of the year. Florists, confectionary shops, restaurants and cafés and gift shops have brought in stock in preparation for it; for the short-life stock (flowers) this weekend could be disastrous3.

Could they have prepared for this to mitigate the risk of suddenly not being able to open/sell in their usual manner? Absolutely. But I’m not about to point fingers and say it’s their own fault. That’s pointless, and I’m pretty sure heaping negativity on top of already-stressed people is not going to help anyone. For those businesses that survive this, a different approach will need to be taken in the future.

What approach? The most likely is one that flies in the face of the modern, consumerist principle behind the day. Remove the reliance on Valentine’s Day and spread the romance out across the year.

Not a simple thing to do, but most certainly achievable, especially as we turn away more and more from traditional media and advertising. As an added bonus, by removing the focus and dependence on the day, this will also remove a lot of the stress and pressure placed upon those who are single and not enjoying it.

Forget Valentine’s Day. Show your love all year round.

And to those of us out there who are single? You’re awesome. Keep doing you – you don’t need anyone else. You have so got this. (But if you are really struggling this today, please reach out to someone).

1 Origins of Valentine’s Day on BigThink
2 CBA Loyalty Valentine’s Day Research via Mirage News
3 Victorians Scramble – ABC
4 Yes, I’m single and not looking, but I’m always up for a cuppa or something stronger 😉
* Advise from Men’s Health, Advice from Psychology Today 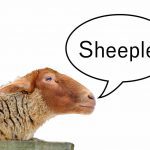 Previous:
A Word to the Sheeple