You may recall one of the multitude of election promises was close to seven hundred million dollars to build ten community hospitals close to major growth centres.You may recall, also, that the West Gippsland Hospital funding for a new facility has still not appeared. You may also be aware that there are numerous issues with Casey hospital – least of which is NOT traffic congestion.

Quite some time ago, I also questioned why, with the rapid population growth and significant investment in the Shire, a new (full) hospital wasn’t planned for Cardinia – or, at least, an upgrade from community to full hospital for, say, Koo Wee Rup.
Well, most of that is by-the-by, although my opinions haven’t changed (particularly in light of a planned 20,000 houses in the Pakenham East development). However, given the incredible short-sightedness of our politicians, and their failure to adequately fund or plan for funding for a great deal of necessary infrastructure, the only thing that is relevant now is the consultation period for the community hospitals is open, and you have a chance to have some input into the where’s and what’s. Image via Where’s the Funding for West Gippsland Hospital

Even given my obvious cynicism above, this is an important opportunity to be heard. The consultation period is only open until 4:00 pm on Friday, October 11th, so make sure you click through the link and give them your input.
Community Hospitals Program Consultation
Also, just a quick reminder to Like us on Facebook, join us on Instagram, follow us on Twitter or join one (or all!) of our Facebook groups. (And please, share us around social media!)
Everything Real Estate
Cardinia Shire Events and Notices
Employment Opportunities by AGTC
Business Advertising Cardinia and Surrounds
Lyn’s Over 40s Ladies Coffee Club with AGTC 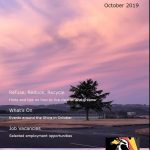 Previous:
News in Letters. And Images